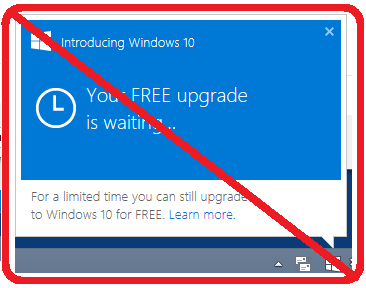 Jack twisted in his chair like a little kid on Christmas Eve while he waited for his free Windows 10 upgrade to complete. He had heard about all the cool features, like the Edge Web Browser, and the App store having Microsoft apps that would work on his new PC and every mobile device he owned. He was looking forward to exploring the new features.  Finally the update finished and rebooted his computer one last time. After running the preliminaries Jack was ready to jump into Windows 10.

But Jack’s enthusiasm faded to disappointment as he realized that Windows 10 was really a work in progress.  The first thing he noticed was that he couldn’t add his printer.  The install program on the CD that came with the printer only said “This operating system is not supported.”   “No problem,” Jack thought to himself, as he keyed up the printer company support site to download the Windows 10 drivers he knew would be there.  But they weren’t – and the Windows 7 and 8 drivers didn’t work any better than his disk.

Also to Jack’s dismay, he found that not all his software worked as expected. He had to ditch his expensive antivirus program, and his Flight Simulation program wouldn’t run at all unless he paid for an upgrade. Even the Windows games he enjoyed, like Solitaire and Mine Sweeper were gone! With Windows 10, Microsoft includes the Microsoft Solitaire Collection app out-of-the-box. But they’re not doing this out of the kindness of their hearts. This Solitaire game will show you banner ads as well as full-screen video advertisements, making money for Microsoft. Opting out of those ads requires a $1.50 per month or $10 per year fee, and that’s just for the “Microsoft Solitaire Collection Premium edition.” The Microsoft Minesweeper app, not installed by default but available in the Windows Store, also has its own entirely separate $1.50 per month or $10 per year fee to upgrade to the “Microsoft Minesweeper Premium edition.” The new Edge browser seemed ok, but he couldn’t find a popup blocker for it and was deluged with web ads. He tried to change the default search engine to Google and couldn’t figure out how.

Now that he was busy testing things, he noticed that his PC wasn’t as fast as it was running Windows 7.  It was what now would be considered a slightly older model, and didn’t have the processor speed or RAM needed to run the new Windows 10 operating system and all his programs efficiently.  By now he was considering reverting back to Windows 7, which Microsoft only gives up graders a month to do.  A month and a day after the upgrade, he would have to completely reformat his hard drive to put Windows 7 back. That would mean hours of backing up his data, reinstalling Windows, and then restoring all his programs and data.

Jack was also concerned about Microsoft wanting so much access to his data.  He had to jump through complicated hoops to keep them from accessing his email messages, web browser history, app data, location, even his WI-Fi network names and passwords from being copied over to Microsoft’s servers.  He found their privacy statement and read “Microsoft collects and uses various types of data, such as your device location, data from your calendar, the apps you use, data from your emails and text messages, who you call, your contacts and how often you interact with them on your device.”  He didn’t WANT Microsoft prying into his life this way!

Overall, Jack was NOT happy that he was among the first people to do the Windows 10 update. If he had it to do over again, he would have waited a few months or even the full year that he had to get the free update.  This would give time for Microsoft to iron out the issues to make a more stable, useful update. After all, Windows 7 and 8 will be supported for years to come, and his Windows 7 PC was working great before the update.  When Windows 11 comes around, he won’t be so quick to be the first on his block to have it… let everyone else be Microsoft’s test subjects, and have the headaches of trying out a new and possibly not mature operating system.